Well,  another year has come to an end.  Once again it’s time to look back on the articles that were the most popular.  The internet is an amazing thing.  I’m able to look at each article and see how many unique visitors it received.  What I’d like to do this year is look at the five (5) most popular articles posted in 2016.

Let’s start the count down.

So is there a “Great Tribulation” in our future? Well, I must admit that the world is in a mess. Maybe events are building up for the start of world war III. If you believe this, I cannot blame you for thinking that way. However, the question is not whether we will all die in a future thermonuclear war. The question becomes does Matthew chapter 24 describe a “Great Tribulation” that is in our future?

It is clear from the context of the passage that the “Great Tribulation” that Jesus was referring to occurred in A.D. 70 with the destruction of the city of Jerusalem and the Temple. This event happened within a generation of the Olivet Discourse – just as Jesus had prophesied. This is what I believe scripture reveals! 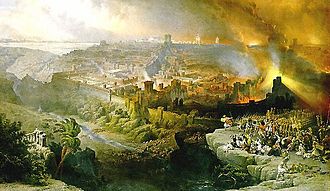 The Siege and Destruction of Jerusalem,
Painting by David Roberts (1850)

Many Christians place the “abomination of desolation” in the future.  However, for this to occur the first thing they need is a rebuilt Temple in Jerusalem.  While this might be a possibility, there are no scriptures that clearly state that the Temple will be rebuilt in our future.  Disagree?  Then for more information on rebuilding the Jewish Temple see the article entitled: The Case for A Restored Nation of Israel.  So when you consider audience relevance, context, and the historical record it’s clear that the “abomination of desolation” occurred in A.D.70 when the pagan Roman Army entered Jerusalem and the Temple complex and showed reverence to their pagan deities.

Want to sell alot of books?  Just put the word “Antichrist” in the title!  Once you have read every scripture containing the word “antichrist” you will be in the position to realize the many deceptions that have been thrust on modern Christianity. And it won’t take long to read every scripture that contains the word “antichrist(s)” because there’s only four (4) scriptures.  All of them are in either 1st or 2nd John.  Of interest is the fact that the word “Antichrist” isn’t even in the book of Revelation.  Like myself you should come to the realization that there is no such figure mentioned or prophesied in the Bible called “the Antichrist”. It’s a false teaching, a myth.

I was a little surprised that this article received the most attention in 2016.  One of the most misunderstood scriptures in our Bible centers around Revelation 21:21. This is the “pearly gates”, “street of gold” scripture.  Should we take this scripture literally? The book of Revelation is an example of  apocalyptic literature. Christians in the first century A.D. were familiar with the apocalyptic style and Old Testament symbolism. They were familiar with biblical imagery.  Christians today are not!  An improper interpretation would give us a vision of eternity that focuses on the carnal, on money, etc. This interpretation of Revelation 21:21 is often used as a selling point for Christianity. Heaven is portrayed as having all this valuable stuff laying around. But think about it for a minute. What good would it do if the streets were paved with gold? If that’s the case, the gold wouldn’t be any more valuable than the asphalt or concrete that our streets are paved with here on earth.

More importantly, the true message of Revelation is missed in regards to the Church. And that is God’s people have become the jewels of righteousness and God is in the midst of His people. An improper interpretation also misses the connections with passages like Isaiah 49. The proper interpretation connects the restoration of Israel with the incorporation of the Gentile “enemies” into the future “bride of Christ.” So which is it? The “pearly gates” and “streets of gold” or the beautifully adorned “bride of Christ”?

Thanks for making the second year of the Scripture Revealed a great success.  We have had visitors to the site from around the world.  Readership and subscriptions have steadily increased throughout the year.  We are looking forward to what the scriptures will reveal in 2017 as we study to show ourselves approved.  May the Lord richly bless each of you in the coming year!

Latest posts by Ron (see all)
20162016 Top ArticlesAdomination of DesolationAntichristpearly gatesstreets of goldThe Great Tribulation
Prev post Earthquakes! Sign of the End Times?
Next post The Truth of God and Being Born Again