Created by His Word 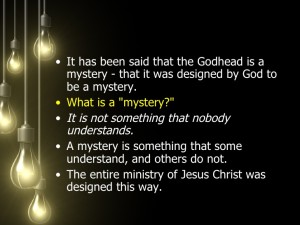 This is one of my favorite scriptures. There’s a lot going on in these verses. One question we must ask: Is the “Word” a person? Is your word your person? Can you separate a man from his word? “Word” is English for the Greek term “logos”. “Logos” means a thought or a concept. In other words the “thought” was with God. The thought but not another divine person. It states that the Word was God. It’s impossible to separate God from His thoughts. The word “logos” is the same term as used in Matthew 8:16 when Jesus cast out devils with His Word. You can think of the Word as the expression of God. God conceived in His thoughts the creation. When the Word was spoken or expressed things became real. When God said “Let there be light, and there was light. ” (Genesis 1:3). God who created all things finally came as a man, revealed in Jesus Christ.

Since Jesus created all things and since one God must be given credit, how can the two scriptures be reconciled without saying that Jesus is that one God?

Colossians 1:15-17(KJV) – ” Who is the image of the invisible God, the firstborn of every creature: For by him were all things created, that are in heaven, and that are in earth, visible and invisible, whether they be thrones, or dominions, or principalities, or powers: all things were created by him, and for him: And he is before all things, and by him all things consist.”

Jesus created all things as the Father, not as an eternal Son! The name of God was not revealed until He took a body and abode on the earth as one of us. Until then the scriptures referred to Him as Jehovah. The primary meaning of the name Lord (Jehovah) is the “the self-existent One, who unveils Himself. In our English language this one God’s name today is Jesus. The Hebrew translation is Yahoshua. The name Jesus translates to “Jehovah is Savior” or “God with us”.

Death, both physical as well as spiritual is God’s payment for sin. Genesis 3:19 is the first reference to death in our Bibles.

Genesis 3:19 (KJV) – “In the sweat of thy face shalt thou eat bread, till thou return unto the ground; for out of it wast thou taken: for dust thou art, and unto dust shalt thou return.”

Death being the penalty for sin is fixed as an eternal law of God. A life is required when sin is committed. This sin penalty was passed done to us from Adam and Eve. In Adam all die (I Corinthians 15:22).

In the Bible the shedding of blood was synonymous with death. There is no proof of death until blood is shed. Leviticus 17:11 declares “For the life of the flesh is in the blood.” By all rights, when a man sins, his own blood should have been required, making him responsible for his own sin. From the time of Adam and Eve’s first sin in the Garden of Eden, God took an animal, killed it, and made a covering for man. Blood was shed to prove that a life had been given as payment for sin.

We see this same concept of a blood sacrifice in the tabernacle in the wilderness. God commanded that a brazen altar be made for sacrificial death and the sprinkling of blood. The High Priest went into Holiest of Holies once a year, with the blood of an innocent animal, to offer a sacrifice for the people’s sin and his own.

Hebrews 9:22 (KJV) – “And almost all things are by the law purged with blood; and without shedding of blood is no remission.”

However, man lived with an inadequate sacrifice. Hebrews 10:4 declares that the blood of bulls and goats was not able to take sin away. The perfect sacrifice was sought to satisfy God for all time. No animal’s death or even the death of a sinful man would do. Whose blood was perfect and without sin? The book of Acts tells us it was God’s blood. Acts 20:28 states “the church of God that he purchased with his own blood”. The blood of Jesus Christ cleanses us from all sin. However, John 4:24 declares that “God is a Spirit”. Then in Luke 24:39 Jesus declares that “A Spirit hath not flesh and bone, as ye see me have.” So then how could God shed blood when He is a Spirit and has no blood? This seems like an impossible quandary.

The answer is found in Jesus Christ, God’s only begotten Son or body. God had to make a body for Himself in order that a death could be counted and blood could be shed as payment for the sins of men.

1 Timothy 3:16 (KJV) – “And without controversy great is the mystery of godliness: God was manifest in the flesh, justified in the Spirit, seen of angels, preached unto the Gentiles, believed on in the world, received up into glory.”

2 Corinthians 5:19 (KJV) – “To wit, that God was in Christ, reconciling the world unto himself, not imputing their trespasses unto them; and hath committed unto us the word of reconciliation.

1 Timothy 2:5 (KJV) – “There is one God, and one mediator between God and men, the man Christ Jesus; who gave himself a ransom for all.”

Notice please that this is not another God but rather the human body that was indwelt by God. Jesus Christ, referred to as the Lamb of God, was this perfect sacrifice offering.

Hebrews 10:19-20 (KJV) – “Having therefore, brethen, boldness to enter into the holiest by the blood of Jesus, by a new and living way, which He hath consecrated for us through the veil, that is to say, His flesh…”